Had coffee with Mick at the 6 Mile River Resort this morning. He is the owner and a bike guy. This campground is biker friendly and highly recommended. Go there if you are near Tagish YT. Lake view, bar, cleanest washrooms I’ve ever seen at a campground, and they rent cabins too!

Decided to hit Whitehorse for breakfast at the local Tim Hortons. After breakfast we went to a motorcycle shop to try to locate some brake pad spares after hearing what our friends in Stewart had said about the Dempster eating brakes. Unfortunately we only found a rear pad in the shop which means in total we have 1 full bike worth of spare pads and 1 extra rear set. Hope that is enough.

We continued on the Alaska Highway and then the Klondike Highway. The plan was to camp in Mayo, but the campsite was not all that good so we backtracked back to the highway and presses on towards Dawson City. Along the way we found a great little campsite at Moose Creek and stayed there.

The next morning we set off for Dawson. We had a lot of rain along the way but it had started to look clearer by the time we arrived. We had left a half day to change 4 tyres from the TKC70s to the TKC80s (a more aggressive tire for dirt). We headed to a gas station in town that had an outdoor carwash and an air compressor (which we needed to seat the beads on our tyres). 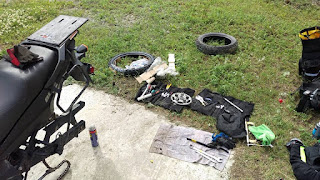 We met a chap named Jessie with his F800GS on his “Big Trip”. He’d sold his house, quick his job, and gone riding He’d done the Dempster earlier in the wet and seemed to think we would manage alright.  We said goodbye to Jessie and started changing tyres. It went surprisingly well due largly to the softness of the TKC80s. In 3 hours we were done all 4 tyres. The bikes look gnarly with the new rubber. 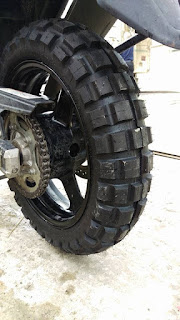 Just as we were starting to pack up it started pouring with rain. All our jackets and pants got wet as well as our tool rolls. Jessie stopped by again to see how we were doing. He’d decided to stay over in Dawson one night before starting to head south.

We made it to The Bunkhouse. Loads of bikes here (because bikers are cheap). The room is (very) small but clean. The bathrooms and showers are shared. Here we met Enrique from Spain originally but living in NY. He’d been on the road for many months on his GS and only has 2 states left to visit before he has been to them all: Alaska and Hawaii. He checks off Alaska tomorrow.

We have met nothing but awesome people on this trip.

Dempster Tomorrow.
Posted by Unknown at 23:11